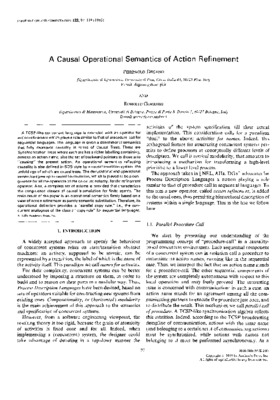 AbstractA TCSP-like concurrent language is extended with an operator for action refinement which plays a role similar to that of procedure-call for sequential languages. The language is given a denotational semantics that fully expresses causality in terms of Causal Trees. These are Synchronization Trees where each arc has a richer labelling containing, besides an action name, also the set of backward pointers to those arcs "causing" the present action. An operational semantics reflecting causality is also defined in SOS style by a causal transition system, the unfoldings of which are causal trees. The denotational and operational semantics agree up to causal bisimulation, which is proved to be a congruence for ail the operators of the calculus; notably, for the refinement operator. Also, a complete set of axioms is provided that characterizes the congruence classes of causal bisimulation for finite agents. The main result of the paper is an operational semantics firmly based on a view of action refinement as purely semantic substitution. Therefore, its operational definition provides a "parallel copy rule," i.e., the concurrent analogous of the classic "copy rule" for sequential languages