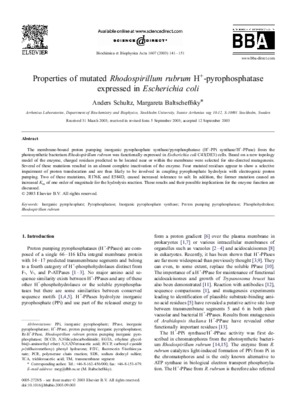 By Anders Schultz and Margareta Baltscheffsky
Get PDF (679 KB)

AbstractThe membrane-bound proton pumping inorganic pyrophosphate synthase/pyrophosphatase (H+-PPi synthase/H+-PPase) from the photosynthetic bacterium Rhodospirillum rubrum was functionally expressed in Escherichia coli C43(DE3) cells. Based on a new topology model of the enzyme, charged residues predicted to be located near or within the membrane were selected for site-directed mutagenesis. Several of these mutations resulted in an almost complete inactivation of the enzyme. Four mutated residues appear to show a selective impairment of proton translocation and are thus likely to be involved in coupling pyrophosphate hydrolysis with electrogenic proton pumping. Two of these mutations, R176K and E584D, caused increased tolerance to salt. In addition, the former mutation caused an increased Km of one order of magnitude for the hydrolysis reaction. These results and their possible implications for the enzyme function are discussed