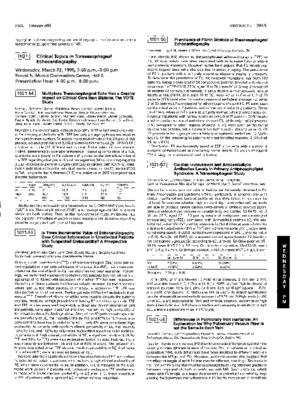 1021-58 Differences in Pulmonary Vein inertance: An Explanation for Why Pulmonary Venous Flow is not the Same in Each Vein

Doppler of pulmonary venous (PV) flow have revealed that peak systolic flow velocity is often different in each of the four PVs, In patients with mitral regurgitation (MR), such differences have been ascribed to different relations between the MR jet and PVs. However, anatomic studies also suggest that the effective length of each PV tree may be different, creating differences in the inertia of PV blood that must be accelerated by driving pressure gradients between lungs and LA, both normally and with MR. Such inertance. which varies with PV length. is a major determinant of pulsatile flow velocity, suggesting the hypothesis that differences in PV inertia may cause or contribute to clinically observed differences in PV flow.MethodsA mathematical model of the atrium with two PVs was developed using an elastance model to describe pressure-volume relations. Using the unsteady Bernoulli equation in a system of differential equations, an analytical solution of systolic PV flow in each vein was achieved. Using the same conditions of initial atrial pressure (10 mmHg) and relaxation, PV length was varied in one vein (5–15cm). while PV length remained constant (10cm) in the other PV.ResultsAs PV length increased (more blood to be accelerated and greater inertia), peak systolic PV flow decreased from 105 to 50 cm/s in that vein, while peak flow increased in the other from 55 to 70cm/s, even though its length was constant, reflecting the reduced LA pressure response to less volume influx from the other pv.ConclusionsPV inertance (length) is a major determinant of PV flow. As PV inertia increases, peak systolic flow velocity decreases. PV flow in one vein influences flow in another. Hence, differences in PV vein length and inertance may be responsible for the differences in PV flow seen clinically in the same atrium. and may also mimic or mask differences created by MR jets