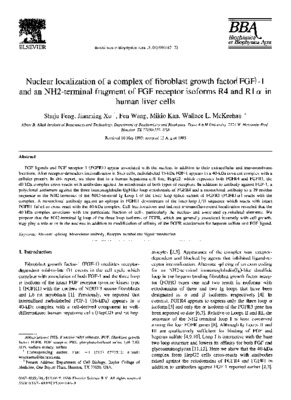 AbstractFGF ligands and FGF receptor 1 (FGFR1) appear associated with the nucleus in addition to their extracellular and transmembrane locations. After receptor-dependent internalization in liver cells, radiolabeled 16-kDa FGF-1 appears in a 40-kDa covalent complex with a cellular protein. In this report, we show that in a human hepatoma cell line, HepG2, which expresses both FGFR4 and FGFR1, the 40-kDa complex cross-reacts with antibodies against the ectodomain of both types of receptors. In addition to antibody against FGF-1, a polyclonal antiserum against the three immunoglobulin (Ig)-like loop ectodomain of FGFR4 and a monoclonal antibody to a 19-residue sequence in the NH2-terminus of the NH2-terminal Ig Loop I of the three loop splice variant of FGFR1 (FGFR1 α) reacts with the complex. A monoclonal antibody against an epitope in FGFR1 downstream of the inter-loop I/II sequence which reacts with intact FGFR1 failed to cross-react with the 40-kDa complex. Cell fractionations and indirect immunofluorescent localization revealed that the 40-kDa complex associates with the particulate fraction of cells, particularly the nucleus and associated cytoskeletal elements. We propose that the NH2-terminal Ig-loop of the three loop isoforms of FGFR, which are generally associated inversely with cell growth, may play a role at or in the nucleus in addition to modification of affinity of the FGFR ectodomain for heparan sulfate and FGF ligand