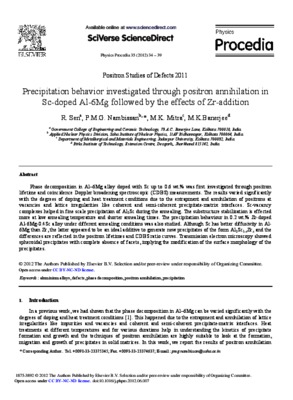 AbstractPhase decomposition in Al–6Mg alloy doped with Sc up to 0.6wt.% was first investigated through positron lifetime and coincidence Doppler broadening spectroscopic (CDBS) measurements. The results varied significantly with the degrees of doping and heat treatment conditions due to the entrapment and annihilation of positrons at vacancies and lattice irregularities like coherent and semi-coherent precipitate-matrix interfaces. Sc-vacancy complexes helped in fine scale precipitation of Al3Sc during the annealing. The substructure stabilization is effected more at low annealing temperature and shorter annealing times. The precipitation behaviour in 0.2wt.% Zr-doped Al-6Mg-0.4Sc alloy under different annealing conditions was also studied. Although Sc has better diffusivity in Al-6Mg than Zr, the latter appeared to be an ideal additive to generate new precipitates of the form Al3Sc1-xZrx and the differences are reflected in the positron lifetimes and CDBS ratio curves. Transmission electron microscopy showed spheroidal precipitates with complete absence of facets, implying the modification of the surface morphology of the precipitates