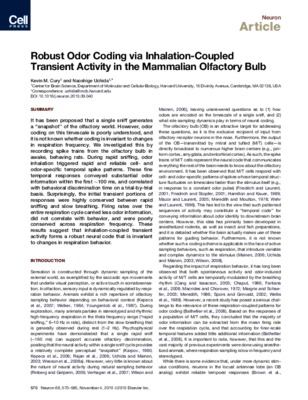 By Kevin M. Cury and Naoshige Uchida
Get PDF (2 MB)

SummaryIt has been proposed that a single sniff generates a “snapshot” of the olfactory world. However, odor coding on this timescale is poorly understood, and it is not known whether coding is invariant to changes in respiration frequency. We investigated this by recording spike trains from the olfactory bulb in awake, behaving rats. During rapid sniffing, odor inhalation triggered rapid and reliable cell- and odor-specific temporal spike patterns. These fine temporal responses conveyed substantial odor information within the first ∼100 ms, and correlated with behavioral discrimination time on a trial-by-trial basis. Surprisingly, the initial transient portions of responses were highly conserved between rapid sniffing and slow breathing. Firing rates over the entire respiration cycle carried less odor information, did not correlate with behavior, and were poorly conserved across respiration frequency. These results suggest that inhalation-coupled transient activity forms a robust neural code that is invariant to changes in respiration behavior