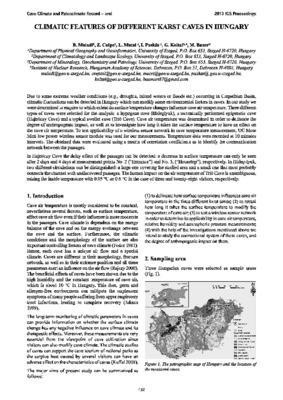 Due to some extreme weather conditions (e.g. droughts, inland waters or floods etc.) occurring in Carpathian Basin, climatic fluctuations can be detected in Hungary which can modify some environmental factors in caves. In our study we were determined to enquire to which extent do surface temperature changes influence cave air temperature. Three different types of caves were selected for the analysis: a hypogene cave (Hideglyuk), a tectonically performed epigenetic cave (Hajnóczy Cave) and a typical swallet cave (Trió Cave). Cave air temperature was determined in order to delineate the degree of anthropogenic impact, as well as to investigate how long it takes the surface temperature to have an effect on the cave air temperature. To test applicability of a wireless sensor network in cave temperature measurement, UC Mote Mini low power wireless sensor module was used for our measurements. Temperature data were recorded at 10 minutes intervals. The obtained data were evaluated using a matrix of correlation coefficients as to identify the communication network between the passages. In Hajnóczy Cave the delay effect of the passages can be detected: a decrease in surface temperature can only be seen after 2 days and 4 days at measurement points No. 2 ("Entrance") and No. 3, ("Housetop"), respectively. In Hideg-lyuk, two different circulations can be distinguished: a large one covering the studied area and a small one that most probably connects the channel with undiscovered passages. The human impact on the air temperature of Trió Cave is unambiguous, raising the inside temperature with 0.05 °C or 0.6 °C in the case of three and twenty-eight visitors, respectively