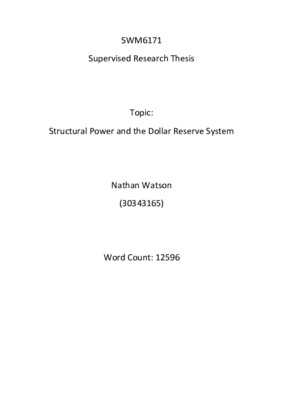 International Relations (IR) as a discipline of study has traditionally been acutely focused on the interaction between states and the consequences of these interactions.1 War, alliance making and the balance of power in the international system have long been considered a primary concern of many IR scholars. Since the end of World War II (WW2) however, the undeniable onset of globalisation has forced the discipline and all its various schools of thought to reassess the nature of the international system, its actors, and the significance of a range of new relationships between states and non-state actors. The most obvious and remarkable example of the globalisation of the international economy has been the rise of China as an economic powerhouse, and regional power in its own right. Since 1978, when China began to undertake a range of market reforms, it has maintained a Gross Domestic Product (GDP) growth rate averaging ten percent a year, lifting some 500 million Chinese from extreme poverty in the process..

Year: 2014
OAI identifier: oai:researchrepository.murdoch.edu.au:24672
Provided by: Research Repository
Download PDF:
Sorry, we are unable to provide the full text but you may find it at the following location(s):