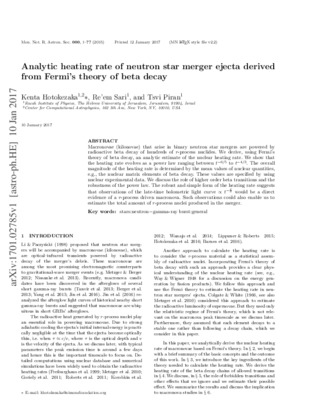 Macronovae (kilonovae) that arise in binary neutron star mergers are powered by radioactive beta decay of hundreds of $r$-process nuclides. We derive, using Fermi's theory of beta decay, an analytic estimate of the nuclear heating rate. We show that the heating rate evolves as a power law ranging between $t^{-6/5}$ to $t^{-4/3}$. The overall magnitude of the heating rate is determined by the mean values of nuclear quantities, e.g., the nuclear matrix elements of beta decay. These values are specified by using nuclear experimental data. We discuss the role of higher order beta transitions and the robustness of the power law. The robust and simple form of the heating rate suggests that observations of the late-time bolometric light curve $\propto t^{-\frac{4}{3}}$ would be a direct evidence of a $r$-process driven macronova. Such observations could also enable us to estimate the total amount of $r$-process nuclei produced in the merger.Comment: 6 pages, 4 figures, submitted to MNRA