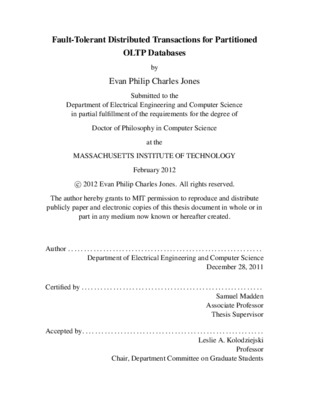 Thesis (Ph. D.)--Massachusetts Institute of Technology, Dept. of Electrical Engineering and Computer Science, 2012.Cataloged from PDF version of thesis.Includes bibliographical references (p. 103-112).This thesis presents Dtxn, a fault-tolerant distributed transaction system designed specifically for building online transaction processing (OLTP) databases. Databases have traditionally been designed as general purpose data processing tools. By being designed only for OLTP workloads, Dtxn can be more efficient. It is designed to support very large databases by partitioning data across a cluster of commodity servers in a data center. Combining multiple servers together allows systems built with Dtxn to be cost effective, highly available, scalable, and fault-tolerant. Dtxn provides three novel features. First, it provides reusable infrastructure for building a distributed OLTP database out of single machine databases. This allows developers to take a specialized backend storage engine and use it across multiple machines, without needing to re-implement the distributed transaction infrastructure. We used Dtxn to build four different applications: a simple key/value store, a specialized TPC-C implementation, a main-memory OLTP database, and a traditional disk-based OLTP database. Second, Dtxn provides a novel concurrency control mechanism called speculative concurrency control, designed for main memory OLTP workloads that are primarily composed of transactions with a single round of communication between the application and database. Speculative concurrency control executes one transaction at a time, with no concurrency control overhead. In cases where there may be stalls due to network communication, it speculates future transactions. Our results show that this provides significantly better throughput than traditional two-phase locking, outperforming it by a factor of two on the TPC-C benchmark. Finally, Dtxn supports live migration, allowing part of the data on one server to be moved to another server while processing transactions. Our experiments show that our approach has nearly no visible impact on throughput or latency when moving data under moderate to high loads. It has significantly less impact than the best commercially available systems when the database is overloaded. The period of time where the throughput is reduced is less than half as long as failing over to another replica or using virtual machine migration.by Evan Philip Charles Jones.Ph.D