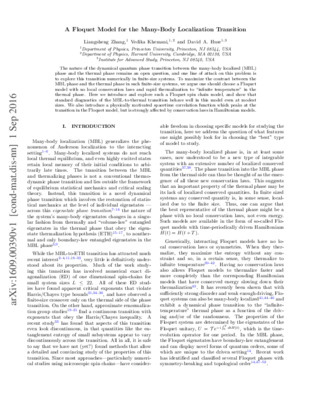 A Floquet Model for the Many-Body Localization Transition

By Liangsheng Zhang, Vedika Khemani and David A. Huse
Get PDF (1,021 KB)

The nature of the dynamical quantum phase transition between the many-body localized (MBL) phase and the thermal phase remains an open question, and one line of attack on this problem is to explore this transition numerically in finite-size systems. To maximize the contrast between the MBL phase and the thermal phase in such finite-size systems, we argue one should choose a Floquet model with no local conservation laws and rapid thermalization to "infinite temperature" in the thermal phase. Here we introduce and explore such a Floquet spin chain model, and show that standard diagnostics of the MBL-to-thermal transition behave well in this model even at modest sizes. We also introduce a physically motivated spacetime correlation function which peaks at the transition in the Floquet model, but is strongly affected by conservation laws in Hamiltonian models