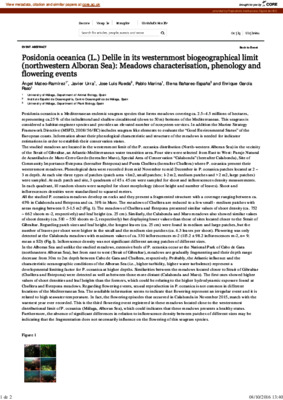 Posidonia oceanica is a Mediterranean endemic seagrass species that forms meadows covering ca. 2.5–4.5 millions of hectares, representing ca.25 % of the infralittoral and shallow circalittoral (down to 50m) bottoms of the Mediterranean. This seagrass is considered a habitat-engineer species and provides an elevated number of ecosystem services. In addition the Marine Strategy Framework Directive (MSFD, 2008/56/EC) includes seagrass like elements to evaluate the “Good Environmental Status” of the European coasts. Information about their phenological characteristic and structure of the meadows is needed for indicator estimations in order to establish their conservation status. The studied meadows are located in the westernmost limit of the P. oceanica distribution (North-western Alboran Sea) in the vecinity of the Strait of Gibraltar, an Atlantic-Mediterranean water transition area. Four sites were selected from East to West: Paraje Natural de Acantilados de Maro-Cerro Gordo (hereafter Maro), Special Area of Conservation “Calahonda” (hereafter Calahonda), Site of Community Importance Estepona (hereafter Estepona) and Punta Chullera (hereafter Chullera) where P. oceanica present their westernmost meadows. Phenological data were recorded from mid November to mid December in P. oceanica patches located at 2 – 3 m depth. At each site three types of patches (patch area 2 m2, large patches) were sampled. At each patch and site, 3 quadrants of 45 x 45 cm were sampled for shoot and inflorescences density measurements. In each quadrant, 10 random shoots were sampled for shoot morphology (shoot height and number of leaves). Shoot and inflorescences densities were standardized to squared meters. All the studied P. oceanica meadows develop on rocks and they present a fragmented structure with a coverage ranging between ca. 45% in Calahonda and Estepona and ca. 31% in Maro. The meadows of Chullera are reduced to a few small - medium patches with areas ranging between 0.5-1.5 m2 (Fig. 1). The meadows of Chullera and Estepona presented similar values of shoot density (ca. 752 – 662 shoots m-2, respectively) and leaf height (ca. 25 cm). Similarly, the Calahonda and Maro meadows also showed similar values of shoot density (ca. 510 – 550 shoots m-2, respectively) but displaying lower values than those of sites located closer to the Strait of Gibraltar. Regarding patch sizes and leaf height, the longest leaves (ca. 25 cm) were found in medium and large patches, but the number of leaves per shoot were higher in the small and the medium size patches (ca. 6.3 leaves per shoot). Flowering was only detected at the Calahonda meadows with maximum values of ca. 330 inflorescences m-2 (115.2 ± 98.2 inflorescences m-2, n= 9; mean ± SD) (Fig.1). Inflorescence density was not significant different among patches of different sizes. In the Alboran Sea and unlike the studied meadows, extensive beds of P. oceanica occur at the National Park of Cabo de Gata (northeastern Alboran Sea), but from east to west (Strait of Gibraltar), meadows are gradually fragmenting and their depth range decrease from 30m to 2m depth between Cabo de Gata and Chullera, respectively. Probably, the Atlantic influence and the characteristic oceanographic conditions of the Alboran Sea (i.e., higher turbidity, higher water turbulence) represent a developmental limiting factor for P. oceanica at higher depths. Similarities between the meadows located closer to Strait of Gibraltar (Chullera and Estepona) were detected as well as between those more distant (Calahonda and Maro). The first ones showed higher values of shoot densities and leaf heights than the formers, which could be relating to the higher hydrodynamic exposure found at Chullera and Estepona meadows. Regarding flowering events, sexual reproduction in P. oceanica is not common in different locations of the Mediterranean Sea. The available information seems to indicate that flowering represent an irregular event and it is related to high seawater temperature. In fact, the flowering episodes that occurred in Calahonda in November 2015, match with the warmest year ever recorded. This is the third flowering event registered in these meadows located close to the westernmost distributional limit of P. oceanica (Málaga, Alboran Sea), which could indicates that these meadows presents a healthy status. Furthermore, the absence of significant differences in relation to inflorescence density between patches of different sizes may be indicating that the fragmentation does not necessarily influence on the flowering of this seagrass species