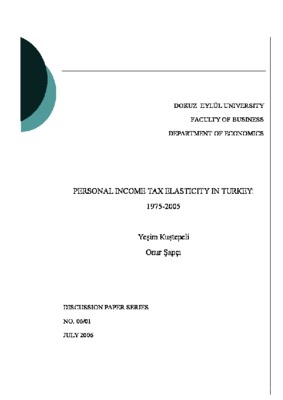 The estimation of tax elasticity; the response of tax revenues to changes in income, is important for at least three reasons: i) formulating government budgets and monitoring tax collections (Sen, 2002), ii) the specification of tax functions, iii) the automatic stabilizing properties of the tax system and the public sector deficit (Hutton, Lambert; 1980, 1982). Among the various approaches to tax elasticity calculation in literature (Tanzi, 1969, 1976; Greytak and McHugh, 1978; Hutton and Lambert, 1980; Ehdaie, 1990), the most famous approach is Tanzi’s Method due to its simplicity and the consensus about its correctness of elasticity estimates. Johansen cointegration tests for the period 1975 - 2005 show that personal income tax elasticity in Turkey is around 0.95, indicating almost unit elasticity. Increasing income can be considered as insurance to maintain an equivalent increase in tax revenue; however it doesn’t seem to be the way to obtain higher tax revenues.Personal income tax, tax elasticity, Tanzi method