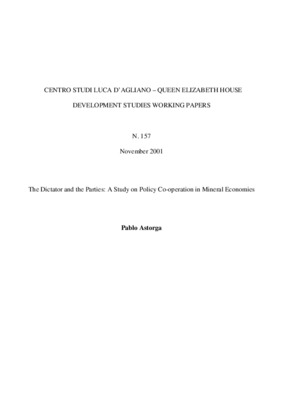 This paper develops a game to study the possibility of co-operative behaviour in a situation where the political system is dominated by two strong, opportunistic parties competing in an economy highly dependent on the export of a commodity. Since a binding agreement as an external solution is unlikely to succeed due to the close association between the incumbent party and the government (the guardian), the paper explores the extent to which co-operation between political parties that alternate in office can rely on self-enforcing strategies to provide an internal solution. For appropriate values of the probability of re-election and the discount factor, it is possible to rely on reciprocity to sustain an early-stopping equilibrium. However, cooperation is undermined by low values of re-election probability out of current revenues and party myopia. In those circumstances, the self-policing solution might not be viable and an institutional response would be necessary. The game also sheds some light on the apparent paradox of situations in some mineral- rich democracies (such as the recent Venezuelan experience) where the enjoyment of considerable external revenues is followed by a period of economic stagnation, a deterioration of political stability, and the surge of a dictatorship threat.Political Economy, Non-cooperative games, Democracy, Mineral Economies, Venezuela