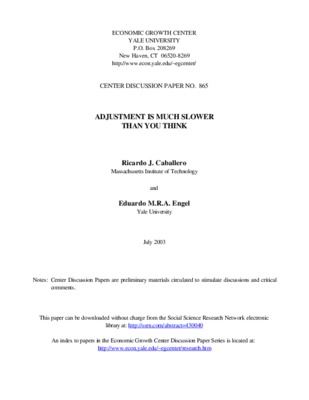 Adjustment Is Much Slower Than You Think

In most instances, the dynamic response of monetary and other policies to shocks is infrequent and lumpy. The same holds for the microeconomic response of some of the most important economic variables, such as investment, labor demand, and prices. We show that the standard practice of estimating the speed of adjustment of such variables with partial-adjustment ARMA procedures substantially overestimates this speed. For example, for the target federal funds rate, we find that the actual response to shocks is less than half as fast as the estimated response. For investment, labor demand and prices, the speed of adjustment inferred from aggregates of a small number of agents is likely to be close to instantaneous. While aggregating across microeconomic units reduces the bias (the limit of which is illustrated by Rotemberg's widely used linear aggregate characterization of Calvo's model of sticky prices), in some instances convergence is extremely slow. For example, even after aggregating investment across all establishments in U.S. manufacturing, the estimate of its speed of adjustment to shocks is biased upward by more than 80 percent. While the bias is not as extreme for labor demand and prices, it still remains significant at high levels of aggregation. Because the bias rises with disaggregation, findings of microeconomic adjustment that is substantially faster than aggregate adjustment are generally suspect.Speed of adjustment, discrete adjustment, lumpy adjustment, aggregation, Calvo model, ARMA process, partial adjustment, expected response time, monetary policy, investment, labor demand, sticky prices, idiosyncratic shocks, impulse response function, Wold representation, time-to-build