Competition In or For the Field: Which is Better

In many circumstances, a principal, who wants prices to be as low as possible, must contract with agents who would like to charge the monopoly price. This paper compares a Demsetz auction, which awards an exclusive contract to the agent bidding the lowest price (competition for the field) with having two agents provide the good under (imperfectly) competitive conditions (competition in the field). We obtain a simple sufficient condition showing unambiguously which option is best. The condition depends only on the shapes of the surplus function of the principal and the profit function of agents, and is independent of the particular duopoly game played ex post. We apply this condition to three canonical examples procurement, royalty contracts and dealerships and find that whenever marginal revenue for the final good is decreasing in the quantity sold, a Demsetz auction is best. Moreover, a planner who wants to maximize social surplus also prefers a Demsetz auction.Demsetz auction, double marginalization, franchising, joint vs. separate auctions, monopoly, procurement, dealerships, royalty contracts 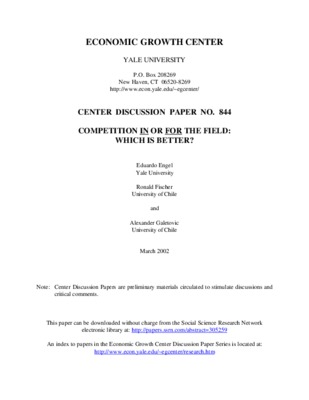