Vertical competition, namely competition between retailers' store brands (or private labels) and manufacturers' brands has become a crucial factor of change of the competitive environment in several industries, particularly in the grocery and food industries. Despite the growing literature on the determinants of the phenomenon, one topic area regarding the impact of vertical competition on the upstream incentives to adopt non-price strategies such as product innovation as well as horizontal and vertical product differentiation has so far received little attention. An idea often put forward is that the increasing bargaining power of retailers and higher vertical competitive pressures can have negative effects on such incentives by lowering manufacturers' profits. On the other hand, there is a significant empirical evidence supporting the view that non-price strategies of product innovation and differentiation continue to play a key role and remain a crucial source of competitive advantages for several manufacturers. In this paper, we present a simple conceptual framework which allows us to focus on two hypotheses which interacting explain why the disincentive effects are not so obvious. The first hypothesis regards the existence of an inverse relationship between the strength of a given brand and the retail margin as suggested by Robert Steiner. Through a two-stage model in which manufacturers do not sell directly to final consumers and the retail industry is not perfectly competitive, Steiner argued persuasively that in such models leading brands in a product category yield lower retail margins than less strong brands. Retailers are forced to stock strong brands and therefore have relatively less bargaining power in negotiating wholesale prices. In addition, price competition among retailers is more intense on strong brands since consumers select these brands to form their perceptions of stores' price competitiveness and are ready to shift to lower price stores if retail price of these brands is not perceived as competitive. Thus, intensive intrabrand competitive pressures discipline retailers pricing policy on stronger manufacturer brands much more than on weaker brands. A key prediction of Steiner's two-stage model is that, since manufacturers' non-price strategies have a margin depressing impact which is additional to their direct demand - creating effect, manufacturers face greater incentives to invest in advertising and R&D. The second central hypothesis in our framework is that in a world of asymmetric brands and intense vertical competition there is a further mechanism at work due to retailers' delisting decisions. Given that retailers have to make room for their store brands at the point of sale, they have to readjust their assortments delisting some manufacturer brands. Retailers would like delisting strong brands given that the retailer's margin on these brands is lower. The problem is that strong brands can contrast vertical pressures better than weaker brands and cannot be delisted. In making shelf - space decisions, rational retailers will recognise that they can delist only the brands whose brand loyalty is lower than their store loyalty. On the contrary, retailers cannot delist brands for which brand loyalty is greater than store loyalty. This implies that manufacturer brands operate in a two- region environment. We call these two regions, respectively, the 'delisting' and 'no-delisting' region and show that the demarcation point between them is given by the level of retailer's store loyalty. By combining the Steiner's hypothesis with the mechanism of delisting, we argue that in a competitive environment characterized by vertical competition is at work a threshold effect which increases optimal 2 R&D and advertising expenditures. The intuition is that it is vital for manufacturers willing to remain sellers of branded products to keep brand loyalty of their brands at a level higher than retailer's store loyalty. And the only way to pursue this goal and avoid to be involved into the risk of being delisted is to boost brands. We also show that vertical competitive pressures are particularly strong on second- tier brands. A brief review of some recent patterns and stylised facts in the food industries and grocery channels consistent with these predictions conclude the paper.vertical competition, store brands, delisting, optimal advertising, Industrial Organization, 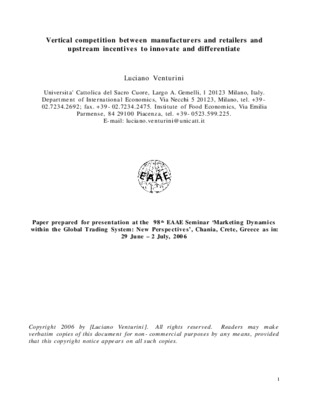