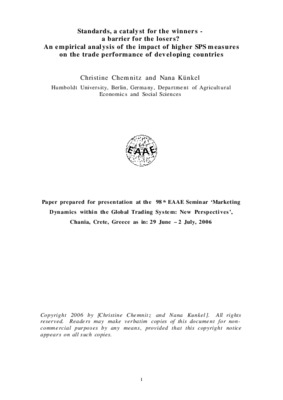 Standards, a catalyst for the winners - a barrier for the losers? An empirical analysis of the impact of higher SPS measures on the trade performance of developing countries

By Christine Chemnitz and Nana Kuenkel
Get PDF (199 KB)

Within the debate about developing countries export competitiveness the increasing importance of food safety and quality standards especially in OECD countries appeals to be one of the major sources of concern. The paper analyses the trade performance of 73 developing countries within the context of stricter SPS measures. The analysis concentrates on the meat and fruit / vegetable sectors as especially high value product sectors are determined by standards. The periods under consideration are 1993- 1995, as a period before the implementation of the SPS Agreement and 2002- 2004, as a period after the implementation. A cluster analysis groups the countries according to the variables "ratio" and "difference" of the export value to OECD countries including the possibility to explore trade performance regarding to the absolute level of change and relative dynamics. Subsequently, interconnections with EU and US border rejections as well as with STDF (Standards and Trade Development Facility) investment are explored. For the results three major findings should be underlined: e) The group of developing countries shows as well in total as in relative terms a very heterogeneous picture of their export development and there is no linear relation between total export value and direction of development. ee) Ten groups were identified in the cluster analysis, like e.g. small winners, large winners, small losers, large losers. eee) Most large exporters increased their market share, but very successful groups were also found among small exporters, especially in the fruit / vegetable market. eeee) Both, border rejections as well as STDF investments did not reflect a particular structure related to market share development of individual countries.Food Safety, SPS, Developing Countries, Cluster Analysis, Competitiveness., International Relations/Trade,