Equilibrium and Efficiency in the Tug-Of-War.

We characterize the unique Markov perfect equilibrium of a tug-of-war without exogenous noise, in which players have the opportunity to engage in a sequence of battles in an attempt to win the war. Each battle is an all-pay auction in which the player expending the greater resources wins. In equilibrium, contest effort concentrates on at most two adjacent states of the game: the “tipping states”, which are determined by the contestants’ relative strengths, their distances to final victory, and the discount factor. In these states battle outcomes are stochastic due to endogenous randomization. Both relative strength and closeness to victory increase the probability of winning the battle at hand. Patience reduces the role of distance in determining outcomes. Applications range from politics, economics and sports, to biology, where the equilibrium behavior finds empirical support: many species have developed mechanisms such as hierarchies or other organizational structures by which the allocation of prizes are governed by possibly repeated conflict. Our results contribute to an explanation why. Compared to a single stage conflict, such structures can reduce the overall resources that are dissipated among the group of players.winner-take-all ; all-pay auction ; tipping ; multi-stage contest ; dynamic game ; preemption ; conflict ; dominance 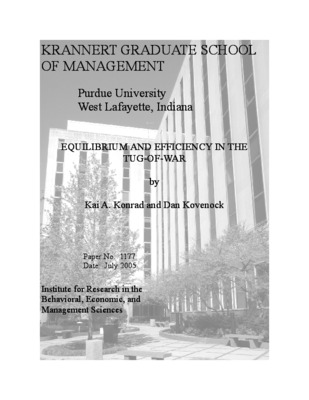