This paper develops an analytic framework for the ESPON 1.3.3 project “The Role and Spatial Effects of Cultural Heritage and Identity”, started in December 2004 by a network of 12 European Universities under the leadership of Ca’ Foscari University of Venice. The conceptual framework of this project lies on the assumption that the cultural heritage of Europe is not just an ensemble of tangible assets to be defended through passive conservation, but rather an element of dynamism of the territory, affecting trajectories of regional development. Thus the proper identification and valorisation of the cultural heritage of Europe is to be considered an integral component of regional planning, with the potential to increase cohesion within an enlarged European Union. The establishment of an “European identity”, gaining from difference and variety, is also part of this vision. In this light, the ESPON 1.3.3 project sets out to highlight the spatial expressions and effects of heritage assets and identify the (existing or potential) elements of territorial coherence at the regional and local scale, mapping the geographical aspects that are actually strengthening regional identities and networks. This paper introduces a list of regional indicators of the European cultural heritage and identity, reflecting elements such as heritage availability, concentration and diversity, spatial patterns at the local and cross-regional level, local embeddedness of intangible heritage assets, pressures on- and potential for the development of heritage, and the governance structure of the heritage management institutions. Parameters are quantitative and qualitative observation allowing the “ordering” of the territory and thus the identification of regional typologies from the elaboration of different ordering criteria. Indicators will cover multiple dimensions regarding the supply, the demand and the spatial organisation of cultural heritage. Data cover the whole NUTS III regional delimitation. The issue of the territorial cohesion of cultural heritage assets is also addressed, considering the following multiple “dimensions” of the interconnection between different “objects” or carriers of meaning: hardware (the infrastructural system), software (images and actual uses), orgware (organizational networks) and shareware (partnerships that support the process of development). These elements are compiled in a framework or model used to analyse the territorial expressions of cultural heritage and identity. 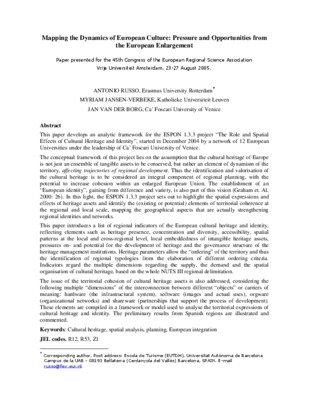