This paper tests the impact of the Costa Rican minimum wage policy on wage inequality and the level of employment in the formal sector (covered by minimum wage legislation) and the informal (uncovered) sector. We also examine the redistributive effects of the minimum wage, between the covered sector and the uncovered sector. Regression analysis using micro data from the Labour Force Surveys over 17 years reveals three important findings. At the median, a unit increase in the minimum wage relative to the average wage is associated with: a) a reduction in wage inequality in the covered sector of between 0.9 percent (using the Gini) and 1.7 percent (using the Theil mean logarithmic deviation) and there is no effect on earnings inequality among the self-employed (using all measures); b) an increase in the level of covered sector employment by 0.56 percent, but no effect on the number of self-employed over time; c) an increase in the average number of hours worked per week by 0.14 percent in the covered sector and 0.34 percent in the uncovered sector. From a theoretical perspective, these finds are counter to the traditional competitive two-sector models of the minimum wage. We interpret them as supporting the monopsonistic and efficiency wage models of the labour market in those industries where the ratio of the minimum wage to the average wage ("toughness") is low but supports the traditional models in those industries where toughness is high. Given that we found overall employment to have increased, minimum wages could be seen as assisting the reallocation of labour from the traditional to the more modern sectors.minimum wages, employment, wage inequality, monopsony, Costa Rica 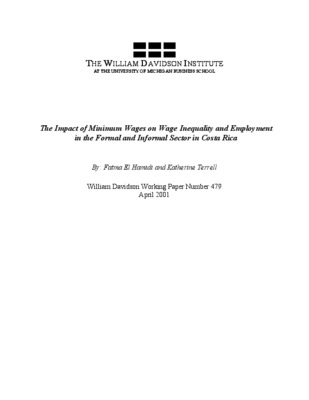