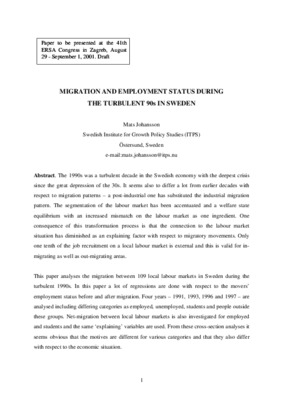 Migration and employment status during the turbulent nineties in Sweden

This paper analyses the migration between 109 local labour markets in Sweden during the 1990s. This decade seems to differ a lot from earlier decades with respect to migration patterns – the industrial migration pattern has been substituted by a post-industrial one. This means also that the connection to the labour market situation has diminished as an explaining factor for the migration choices. Most of the people in the ‘working ages’ move between local labour markets for other reasons than job opportunities. In this paper a lot of regressions are done with respect to the movers’ employment status before and after migration. Four the years 1993, 1994, 1996 and 1997 – and the analyses include differing categories as employed, unemployed, students and people outside these groups. The net-migration between the local labour markets are also analysed for the same groups and the same ‘explaining’ variables are used. From these cross-section analyses it seems obvious that the motives are different for various categories and that they also differ with respect to the economic situation.