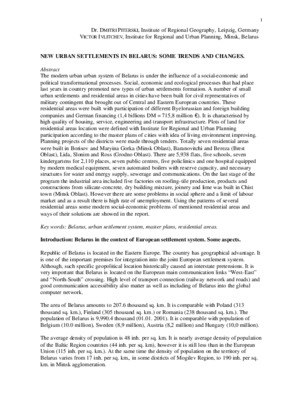 New urban settlements in Belarus: some trends and changes

The modern urban settlement system of Belarus and Russia is under the influence of European social-economic and political transformational processes. This paper presents and discusses some new trends and changes of this development. In Belarus a number of small urban settlements and residential areas in cities have been built for civil representatives of military contingents which left Central and Eastern European countries. Besides that it was done to take off a tension in housing problem in the Armed forces. These residential areas were built with participation of different Byelorussian and foreign building firms and German financing (1,4 billions DM). It is characterized by high quality of housing, service, engineering and transport infrastructure. Plots of land for residential areas location were defined with Institute for Regional and Urban Planning participation according to the master-plans of cities with idea of habitat improving. Planning projects of the districts were made through tenders. Totally seven residential areas for civil representatives of military contingents were built in Belarus: in Borisov and Maryina Gorka (Minsk Oblast), in Baranovichi and Beryoza (Brest Oblast), in Lida, Slonim and Ross (Grodno Oblast). There are over 5900 flats (with a total dwelling space of over 360.000 sq. m). Such residential areas were built in Russia as well (for example in Elnya, Smolensk Oblast). However there are some problems in social sphere and a limit of labour market and as a result there is high rate of unemployment. Using the patterns of several residential areas in Belarus and in Russia some modern social-economic problems of mentioned residential areas and ways of their solutions are showed in the report. The situation in the field of the development of new urban settlements in Belarus and in Russia requires, in principle, a continually monitoring as well as an subsequent investigation and evaluation. Key words: Belarus, Russia, urban settlement system, master plans, residential areas.