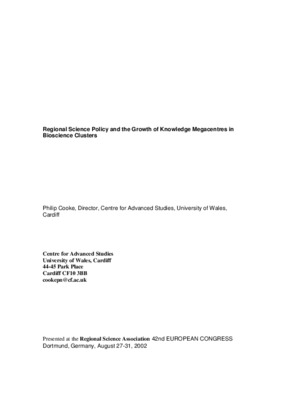 Changes in epistemology in biosciences are generating important spatial effects. The most notable of these is the emergence of a few Bioscience Megacentres of basic and applied bioscience (molecular, post-genomic, proteomics, etc.) medical and clinical research, biotechnology research, training in these and related fields, academic entrepreneurship and commercial exploitation by clusters of drug discovery start-up and spin-off companies, along with specialist venture capital and other innovation system support services. Large pharmaceutical firms that used to lead such knowledge generation and exploitation processes are becoming increasingly dependent upon innovative drug solutions produced in such clusters, and Megacentres are now the predominant source of such commercial knowledge. Big pharma is seldom at the heart of Megacentres such as those the paper will argue are found in about four locations each in the USA and Europe, but remains important for some risk capital (milestone payments), marketing and distribution of drugs discovered. The reasons for this shift (which is also spatial to some extent) are as follows: first, bioscientific research requires the formation of collaboratory relationships among hitherto cognitively dissonant disciplines molecular biology, combinatorial chemistry, high throughput screening, genomics, proteomics and bioinformatics to name a few. Second, the canonical chance discovery model of bioscientific research is being replaced by rational drug design based on those technologies because of the need massively to reduce search costs and delivery timeframes. Third, the US and to some extent European 'Crusade against Cancer' and other pathologies has seen major increases in basic research budgets (e.g. to $27.3 billion in 2003 for the US National Institutes of Health) and foundation expenditure (e.g. $1billion in 2003 by the UK's Wellcome Trust; $1 billion approximately by the top ten US medical foundations, and a comparable sum from corporate foundations). Each of these tendencies weakens the knowledge generation role of 'big pharma'and strengthens that of Megacentres. But the process also creates major, new regional disparities, which some regional governances have recognised, causing them to develop responsibilities for regional science policy and funding to offset spatial biases intrinsic in traditional national (and in the EU, supranational) research funding regimes. Responses follow a variety of models ranging from market following to both regionalised (decentralising by the centre) and regionalist (ground-up), but in each case the role of Megacentres is justified in health terms. But their role in assisting fulfilment of regional economic growth visions is also clearly perceived and pronounced in policy terms.