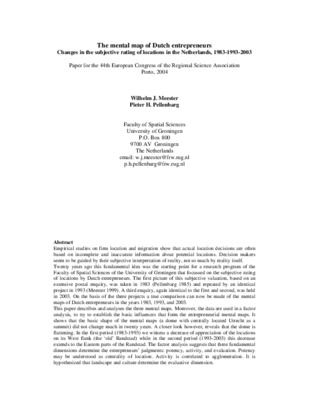 The mental map of Dutch entrepreneurs. Changes in the subjective rating of locations in the Netherlands, 1983-1993-2003

Empirical studies on firm location and migration show that actual location decisions are often based on incomplete and inaccurate information about potential locations. Decision makers seem to be guided by their subjective interpretation of reality, not so much by reality itself. Twenty years ago this fundamental idea was the starting point for a research program of the Faculty of Spatial Sciences of the University of Groningen that focussed on the subjective rating of locations by Dutch entrepreneurs. The first picture of this subjective valuation, based on an extensive postal enquiry, was taken in 1983 (Pellenbarg 1985) and repeated by an identical project in 1993 (Meester 1999). A third enquiry, again identical to the first and second, was held in 2003. On the basis of the three projects a true comparison can now be made of the mental maps of Dutch entrepreneurs in the years 1983, 1993, and 2003. This paper describes and analyses the three mental maps. Moreover, the data are used in a factor analysis, to try to establish the basic influences that form the entrepreneurial mental maps. It shows that the basic shape of the mental maps (a dome with centrally located Utrecht as a summit) did not change much in twenty years. A closer look however, reveals that the dome is flattening. In the first period (1983-1993) we witness a decrease of appreciation of the locations on its West flank (the ‘old’ Randstad) while in the second period (1993-2003) this decrease extends to the Eastern parts of the Randstad. The factor analysis suggests that three fundamental dimensions determine the entrepreneurs’ judgments: potency, activity, and evaluation. Potency may be understood as centrality of location. Activity is correlated to agglomeration. It is hypothesized that landscape and culture determine the evaluative dimension.