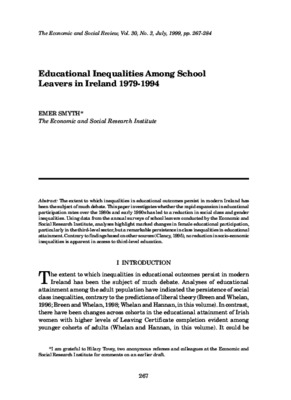 The extent to which inequalities in educational outcomes persist in modern Ireland has been the subject of much debate. This paper investigates whether the rapid expansion in educational participation rates over the 1980s and early 1990s has led to a reduction in social class and gender inequalities. Using data from the annual surveys of school leavers conducted by the Economic and Social Research Institute, analyses highlight marked changes in female educational participation, particularly in the third-level sector, but a remarkable persistence in class inequalities in educational attainment. Contrary to findings based on other sources (Clancy, 1995), no reduction in socio-economic inequalities is apparent in access to third-level education.