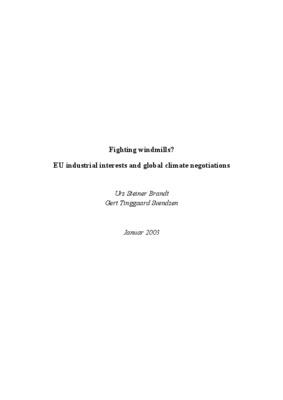 Why has the EU been so eager to continue the climate negotiations? Can it be solely attributed to the EU feeling morally obliged to be the main initiator of continued progress on the climate change negotiations, or can industrial inter-ests in the EU, at least partly, explain the behaviour of the EU? We suggest that the EU has a rational economic interest in forcing the technological develop-ment of renewable energy sources to get a first-mover advantage, which will only pay if a sufficient number of countries implement sufficiently stringent GHG reductions. The Kyoto Protocol, which imposes binding reductions on 38 OECD countries, implies that, as a first-mover, the EU will be to sell the neces-sary new renewable technologies, most prominently wind mills, to other coun-tries, when they ratify and implement the Kyoto target levels. In the latest EU proposal made in Johannesburg, the EU pushed for setting a target of 15% of all energy to come from sources such as windmills, solar panels and waves by 2015. Such a target would further the EU’s interests globally, and could ex-plain, in economic terms, why the EU eagerly promotes GHG trade at a global level whereas the US has left the Kyoto agreement to save the import costs of buying the EU’s renewable systems.First mover advantages, Wind mill industry, greenhouse gases, Kyoto Protocol, EU