The growing interest in public policy contributing to the expansion of industrial innovation has become increasingly significant, resulting from the interrelationship between innovation, competitiveness, and economic growth. Thus, the identification of barriers and limitations hindering the success of innovation will define the principles on which efficient and successful public policy must be based. This paper presents the results of an empirical study aimed at identifying the most significant barriers to the development of innovation, as ascribed by industrial firms belonging to the hi-tech sector, alongside more traditional industries. The data was collected through a field survey of industrial firms located in the Northern region of Israel, covering two different sub-regions: the metropolitan core and the periphery. The study also investigated the differences between the industrial sectors (hi-tech vs. traditional and type of region (metropolitan vs. periphery) with regard to the importance ascribed to the various barriers. A considerable similarity was identified between the industrial sectors and the different regions investigated, with regard to the most significant factors acting as barriers that slow down or all together stop innovative projects. These findings could facilitate in the design of a comprehensive policy in order to minimize the negative impact of such barriers on the expansion of industrial innovation. 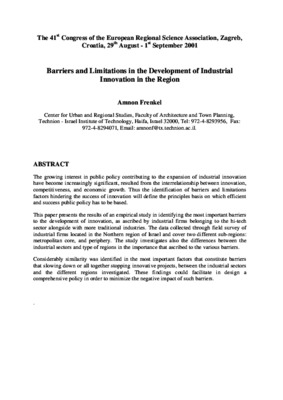