Although the concept of social capital is intuitively appealing, policy-makers and scholars have been frustrated by difficulties in finding practical ways to build social capital where it is either weak or absent. Of particular concern in development work has been the difficulty of building bridging forms of social capital to more effectively integrate isolated groups into a global economy. A main source of resistance, in this regard, is the apparent unwillingness of groups with highly dense social networks to invest some of their resources in building less dense but more extensive ties that will connect them to more distant markets, resources, and information. This concern is central to the larger issue of reducing economic inequalities between groups that are based on differential access to social capital, such as the entrepreneurial advantages of one ethnic or religious group vis-à-vis another. In the long run, a solution to this problem will reduce inter-group tensions where two groups with different levels of social capital occupy the same space. The thesis of this paper is that the main obstacle to solving the aforementioned problem is the failure to distinguish between the "structural properties" of effective bridging social networks and the "paths" through which individual groups create bridging networks. The starting point of the paper is the assumption that the structural properties of effective bridging networks can be defined quite easily. The work of Mancur Olson has been most useful in this regard. However, the identification of different paths through which the same structural network properties may be created has received much less attention in the literature. In fact, the notion of "path dependencies" has oftentimes resulted in a view that different paths must mean different structural network property outcomes. This limited view of paths to effective social capital neglects the real concerns and potentially serious costs of destroying "bonding" social capital in the process of building bridging ties. The psychological and spiritual damage to Native Americans through the boarding school programs in the 19th and early 20th centuries is an illustration of this danger. Thus, the task for researchers is to identify specific paths through which indigenous social capital may be connected to bridging ties without creating costs to essential bonding tie relationships. Empirical research examples from thirty years of the author's study of collective action in communities in a variety of settings is used to illustrate how different paths can achieve the same outcomes with respect to building bridging ties for isolated communities. This includes: urban neighborhood organization, Japanese American ethnic communities, rural Midwestern American rural community leaders' networks. Village communities in post-Soviet Russia, Tribal Colleges on Native American reservations and Nationalist and Republican communities in Northern Ireland. 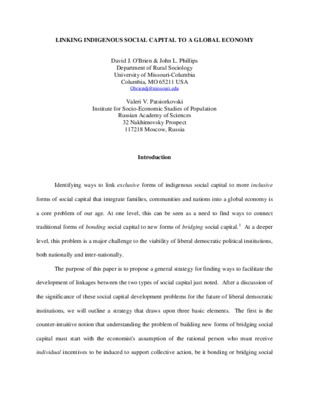