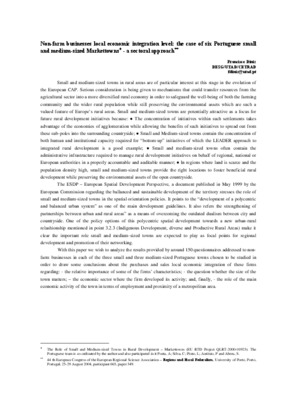 Small and medium-sized towns in rural areas are of particular interest at this stage in the evolution of the European CAP. Serious consideration is being given to mechanisms that could transfer resources from the agricultural sector into a more diversified rural economy in order to safeguard the well-being of both the farming community and the wider rural population while still preserving the environmental assets which are such a valued feature of Europe¡¯s rural areas. Small and medium-sized towns are potentially attractive as a focus for future rural development initiatives because: ¡ñ The concentration of initiatives within such settlements takes advantage of the economies of agglomeration while allowing the benefits of such initiatives to spread out from these sub-poles into the surrounding countryside; ¡ñ Small and Medium-sized towns contain the concentration of both human and institutional capacity required for ¡°bottom-up¡± initiatives of which the LEADER approach to integrated rural development is a good example; ¡ñ Small and medium-sized towns often contain the administrative infrastructure required to manage rural development initiatives on behalf of regional, national or European authorities in a properly accountable and auditable manner; ¡ñ In regions where land is scarce and the population density high, small and medium-sized towns provide the right locations to foster beneficial rural development while preserving the environmental assets of the open countryside. The ESDP ¨C European Spatial Development Perspective, a document published in May 1999 by the European Commission regarding the ballanced and sustainable development of the European Union territory stresses the role of small and medium-sized towns in the spatial orientation policies. It points to the ¡°development of a polycentric and balanced urban system¡± as one of the main development guidelines. It also refers the strengthening of partnerships between urban and rural areas¡± as a means of overcoming the outdated dualism between city and countryside. One of the policy options of this polycentric spatial development towards a new urban-rural relashionship mentioned in point 3.2.3 (Indigenous Development, diverse and Productive Rural Areas) make it clear the important role small and medium-sized towns are expected to play as focal points for regional development and promotion of their networking. With this paper we wish to analyze the results provided by around 150 questionnaires addressed to non-farm businesses in each of the three small and three medium-sized Portuguese towns chosen to be studied in order to draw some conclusions about the purchases and sales local economic integration of these firms regarding: - the relative importance of some of the firms¡¯ characteristics; - the question whether the size of the town matters; ¨C the economic sector where the firm developed its activity; and, finally, - the role of the main economic activity of the town in terms of employment and proximity of a metropolitan area.