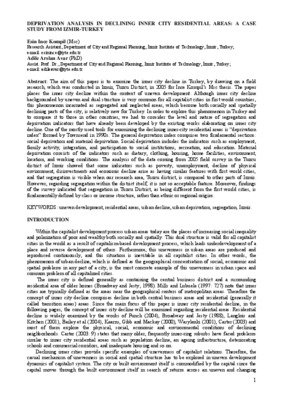 The aim of this paper is to examine the inner city decline in Turkey, by drawing on a field research, which was conducted in Izmir, Tuzcu District, in 2005. The paper places the inner city decline within the context of uneven development. Although inner city decline backgrounded by uneven and dual structure is very common for all capitalist cities in developed countries, this phenomenon incarnated as segregated and neglected areas, which become both socially and spatially declining parts of the city, is relatively new for Turkey. In order to explore this phenomenon in Turkey and to compare it to those in other countries, we had to consider the level and nature of segregation and deprivation indicators that have already been developed by the existing works elaborating on inner city decline. One of the mostly used tools for examining the declining inner-city residential areas is â€œdeprivation indexâ€ formed by Townsend in 1990s. The general deprivation index comprises two fundamental sections: social deprivation and material deprivation. Social deprivation includes the indicators such as employment, family activity, integration, participation to social institutions, recreation, and education. Material deprivation consists of the indicators such as dietary, clothing, housing, home facilities, environment, location, and working conditions. The analysis of the data coming from 2005 field survey in the Tuzcu district of Izmir showed that some indicators such as poverty, unemployment, decline of physical environment, disinvestments and economic decline arise as having similar features with developed countries, and that segregation is visible when our research area, Tuzcu district, is compared to other parts of Izmir. However, regarding segregation within the district itself, it is not so acceptable feature. Moreover, findings of the survey indicated that segregation in Tuzcu District, as being different from the developed countries, is fundamentally defined by class or income structure, rather than ethnic or regional origins.