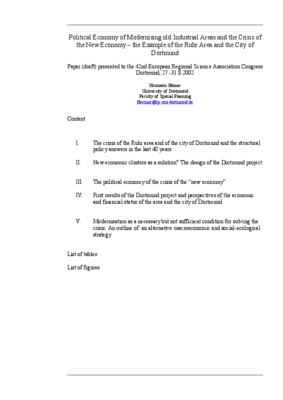 Political economy on modernisation of old industrial areas and the crisis of the new economy: the example of the Ruhr area and the citiy of Dortmund

In 90s of the last century two trends took place in a parallel manner: (1) the neoliberal transformation of the western industrial countries continued, but indeed with a very significant difference between the USA (and UK) and Western Europe. (2) High growth rates in the US, partly induced by the 90s accumulation wave in the "new economy", resulted - driven by the asset inflation since 1996 - in a fundamental over-accumulation of capital in the IT-sector. The crisis of the new economy and the implosion of the asset markets now seem to bear a deeper than a ´normal´ cyclical crisis. Old industrial regions in crisis (high unemployment and poorness rates, low public budgets and investments and therefore neglected infrastructure systems) like the Ruhr area or some parts of them like the city of Dortmund try to reduce their employment problems by launching new regional clusters like the IT-sector and e-commerce, micro-systems technologies and logistics in the late 90s and the new decade. Mc Kinsey consulted the city of Dortmund and Thyssen-Krupp - the second largest steel company of western Europe and the owner of the former steel plants in Dortmund - to create 60.000 new jobs until the year 2010 in those new basic industries, founded on a very successful development of the software complex in the 80s and 90s that created about 15.000 jobs since 1985. The ´empirical base´ of these prospects have been prolonged exponential functions of the new economy branches in the late 90s. The combination of the general economic crisis, the special crisis of the new economy and the results of the contra-productive macroeconomic austerity policy including the federal tax reforms lead to a very deep crisis of the public funds in the Ruhr-area, the city of Dortmund, the Land North-Rhine Westfalia an the FRG. Although we can assume that the branches of the new economy will expand again after the crisis - but with much lower growth rates as before - the public actors will have to reduce their activities significantly, if the austerity policies are continued. So it is very probably that the job targets until 2010 will not be realised. Instead of a fundamental change of macroeconomic policy more symbolic policies are activated intensively: - top events (world football championship, appointment for the 2012 Olympic Games, Triennale) are applied; - new expensive flagship - projects which reduce the money for the non-spectaculative expenditures (for schools, qualification activities etc.) - are launched: the Metrorapid as a new regional high speed train between Düsseldorf and Dortmund; entertainment and cultural industries investments like indoor skiing malls, philhamonic halls; - policies "without money" take place: voluntarian appelles, privatisation of public infrastructure, more competition in the public sphere; more pressure on unemployed people. - debates, but no decisions, are going on on functional reforms and new institutions like the Metropolitan Region Rhine-Ruhr, Ruhstadt and so on. As a result of this analysis a framework on an eco-social new deal for regions in crisis is proposed. This means alternative strategies on all relevant tiers for regional development, the european, federal, länder, regional and local level. Theories of vertical and horizontal interweaving (Scharpf) and alternative macroeconomic strategies in combination with the state of the art of regional innovation strategies are discussed briefly.