IMMIGRATION POLICY AND THE AGRICULTURAL LABOR MARKET: THE EFFECT ON JOB DURATION

We have proposed and estimated a Heckman-type two stage model with legal status of farm workers using an ordered probit model in the first stage and a duration model in the second stage. Using the National Agricultural Workers Survey, self-reported legal status categories are: unauthorized, authorized, permanent resident, or citizen. The duration model is estimated conditionally upon the worker's legal status to address selectivity bias. The duration estimation has significant coefficients on the selection bias correction term for all legal status equations except for that of citizen workers. The most important finding from our estimation is that unauthorized workers do not necessarily have shorter farm job durations than legal workers. First, the average predicted farm job duration for unauthorized workers is the second longest among the four legal status categories. Second, the simulation analysis indicates that the duration of the "typical" unauthorized worker will be longer when working under an authorized or permanent resident status.Labor and Human Capital, 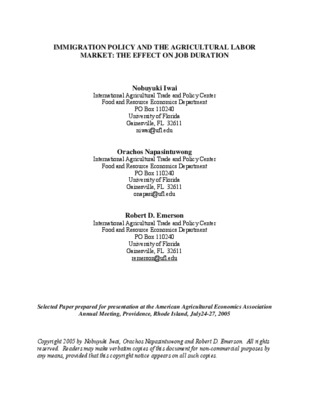