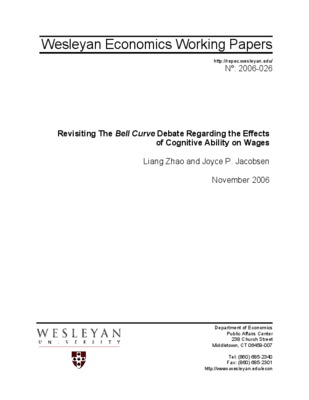 In The Bell Curve, Herrnstein and Murray (1994) claim, based on evidence from cross-sectional regressions, that differences in wages in the U.S. labor market are predominantly explained by general intelligence. Cawley, Heckman, and Vytlacil (1999), using evidence from random effects panel regressions, reject this claim, in part because returns to general intelligence vary by racial and gender subgroups in their results. In this article, we examine the regression methods used by both sides of the debate and conclude that neither is the appropriate method to analyze the NLSY data that both use. We introduce the Hausman-Taylor estimator to obtain consistent estimated coefficients on the time-invariant general intelligence-related variables and also extend the analysis up through 2002. While many additional socio-economic factors are important explanatory variables in determining the wage rate, the effect of general intelligence on wages is larger in the Hausman-Taylor specification for the 1979-1994 panel than in either the cross-sectional or random effects models, though it becomes statistically insignificant for the 1994-2002 panel. The Hausman-Taylor analysis also indicates no significantly different returns to intelligence by race or gender group.wages, cognitive ability, education