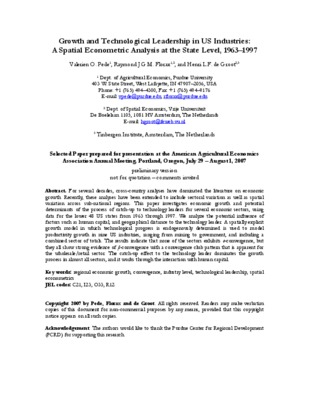 Growth and Technological Leadership in US Industries: A Spatial Econometric Analysis at the State Level, 1963-1997

For several decades, cross-country analyses have dominated the literature on economic growth. Recently, these analyses have been extended to include sectoral variation as well as spatial variation across sub-national regions. This paper investigates economic growth and potential determinants of the process of catch-up to technology leaders for several economic sectors, using data for the lower 48 US states from 1963 through 1997. We analyze the potential influence of factors such as human capital, and geographical distance to the technology leader. A spatially explicit growth model in which technological progress is endogenously determined is used to model productivity growth in nine US industries, ranging from mining to government, and including a combined sector of totals. The results indicate that none of the sectors exhibits ó-convergence, but they all show strong evidence of â-convergence with a convergence club pattern that is apparent for the wholesale/retail sector. The catch-up effect to the technology leader dominates the growth process in almost all sectors, and it works through the interaction with human capital.regional economic growth, convergence, industry level, technological leadership, spatial econometrics, Industrial Organization, C21, I23, O33, R12,