WP 48 - Population ageing in the Netherlands: Demographic and financial arguments for a balanced approach

Dutch policy makers recently set the public debate on ageing alight by enforcing drastic cuts in early retirement opportunities; increasing taxation of the aged and augmenting retirement age are also considered. The prime argument is to diminish a burden on public finances far in future. This paper argues that this argument ignores, first, that on a cohort basis ageing is a very limited problem and, therefore, also the financing of future occupational pensions based on capital funding. Second, data taken from the Income Panel Survey show that the financing of the basic pay-as-you-go state pension AOW over the coming decades is not a major problem that could not be solved by the future increase in employment participation which may plausibly be expected. Because of its strong focus on public finance Dutch policymaking also ignores important inequalities in the ageing process as well as important cost disadvantages of private pension funding in comparison with collective schemes – two aspects which, by contrast, are central to the UK pension debate. The first inequality concerns the risk of increased poverty among retired women that may result from the changes made in the occupational pension system and occur because of low lifetime earnings from the massive part-time employment; the phenomenon should be discussed and prevented. Second, the life expectancy of the low educated is significantly shorter than that of the better educated. In the case of a uniform pension age this induces the risk of a transfer of pension savings from the former to the latter, from the less to the better paid; this should be accounted for when discussing augmenting the pension age. 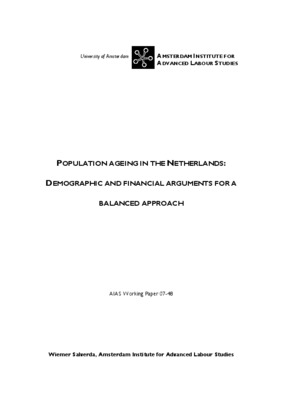