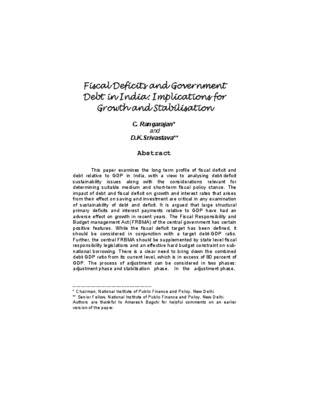 Fiscal deficits and government debt in India: Implications for growth and stabilisation.

This paper examines the long term profile of fiscal deficit and debt relative to GDP in India, with a view to analysing debt-deficit sustainability issues along with the considerations relevant for determining suitable medium and short-term fiscal policy stance. The impact of debt and fiscal deficit on growth and interest rates that arises from their effect on saving and investment are critical in any examination of sustainability of debt and deficit. It is argued that large structural primary deficits and interest payments relative to GDP have had an adverse effect on growth in recent years. The Fiscal Responsibility and Budget management Act (FRBMA) of the central government has certain positive features. While the fiscal deficit target has been defined, it should be considered in conjunction with a target debt-GDP ratio. Further, the central FRBMA should be supplemented by state level fiscal responsibility legislations and an effective hard budget constraint on subnational borrowing. There is a clear need to bring down the combined debt-GDP ratio from its current level, which is in excess of 80 percent of GDP. The process of adjustment can be considered in two phases: adjustment phase and stabilisation phase. In the adjustment phase, fiscal deficit should be reduced in each successive year until revenue deficit, and correspondingly, government dissaving, is eliminated. In the second phase, fiscal deficit could be stabilised at 6 percent of GDP. The debt-GDP ratio would eventually stabilise at 56 percent. In this process, the ratio of interest payments to revenue receipts will fall, enabling a progressively larger amount of primary revenue expenditure to be incurred on the social sectors.Fiscal deficit ; Economic growth