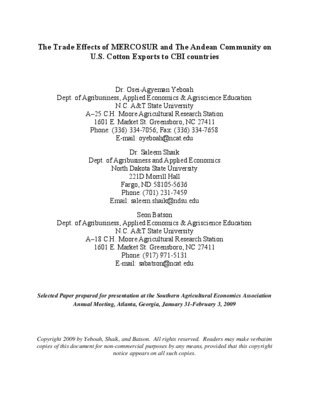 The Trade Effects of MERCOSUR and The Andean Community on U.S. Cotton Exports to CBI countries

The United States engagement in nonreciprocal preferential trade arrangements has been proliferating with several developing countries throughout the past couple of decades. One of the oldest and more successful of these arrangements has been the Caribbean Basin Initiative (CBI).The CBI is a general term used to refer to the Caribbean Basin Economic Recovery Act of 1983 (CBERA), the Caribbean Basin Economic Recovery Expansion Act of 1990 (CBERA Expansion Act), and the Caribbean Basin Trade Partnership of 2000 (CBTPA) (Ozden and Sharma 2006). The central premise behind the plan was that, by encouraging the CBI countries to become more open and liberal, trade would expand – and eventually translate into economic development and growth (Deere, 1990). The partnership between the U.S. and the CBI provides duty and quota free treatment for 1) textile and apparel products assembled from U.S. fabric in CBI beneficiary countries from U.S. fabric and 2) yarn and apparel assembled from CBI regional fabric, subject to a quantitative limit which increases over time. Cotton is a major commodity for the U.S. generating about $4-5 billion in annual cash receipts (Dodson 1995). Furthermore, cotton is a major raw material for the textile and apparel industries creating heavy dependence by these industries on cotton production. The demand for raw fiber is derived from consumer demand for textile products where cotton is an important textile fiber (Marseli and Epperson, 2002). This paper analyzes the effects these regional trade agreements have on CBI countries cotton imports from US by calculating the associated trade creation and trade diversion values.Panel data, trade diversion, trade creation, CBI, cotton imports, Agricultural and Food Policy, International Relations/Trade,