Conflict and Uncertainty: A Dynamic Approach

Most of the conflict theory papers have used a one-shot game set-up. This does not correspond to reality and is certainly incapable of modeling real conflict situations. We propose a dynamic model with N-agents in an infinite time frame which allow us to adequately analyze conflicts. The dynamic aspects of the conflict come at least from two sources: first, the preferences on the good in dispute are not static; second, agentsin conflict can influence the future of the conflict by making investment in conflict's technology. We use a simple deterministic rule that defines the evolution of the subjective valuation for the good in dispute according to the results obtained by the agents in the recent past. During each period the realization of stochastic variables of the nature's states induces uncertainty in the game. The model is a theoretical approach that can be applied to evaluate the role of uncertainty and valuations' evolution on the optimal choices of forward-looking economic agents that seek to appropriate a share of a divisible resource.Conflict Theory, Dynamic Economic Model, Uncertainty 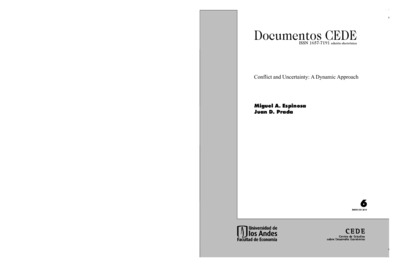