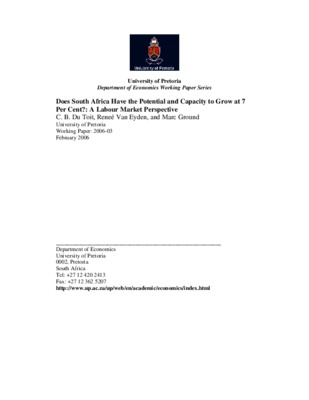 Does South Africa Have the Potential and Capacity to Grow at 7 Per Cent?: A Labour Market Perspective

Facing the challenge to adjust, the question is to what extent South African markets, specifically labour and investment markets, are flexible enough to enhance its global competitiveness, without having to revert to inward domestic protectionism. In investigating the level of flexibility in this regard, we need to determine the adjustment potential or capacity of the South African economy. However, modelling potential output and/or capacity is problematic. Building on previous research, this paper’s estimation of potential output for South Africa is based on a structural production function relationship with the maximum level of output consistent with stable inflation, supported by a full-scale macro-econometric model which is primarily supply-side driven, with capacity utilisation (or the output gap) as one of the key drivers of economic activity. The extent to which capacity is utilised in the economy is determined (defined) by the actual output (gross domestic product) relative to the potential of the economy to generate gross domestic product. Following this approach, South Africa’s potential employment needs to be determined. Does the entire labour force of working age have the potential and necessary skills to fill the available vacancies in the job market? On the contrary, our belief is that there exist certain constraints/rigidities in the labour market, which reduce the ranks of the potentially employable. In order to capture this effect, we assume that some “equilibrium or natural rate of unemployment” exists. Therefore, we presuppose a NAWRU − a natural rate of unemployment consistent with stable wage inflation. Ideally speaking, the NAWRU of an economy should be stable and not trending. However, the estimate we obtain for the NAWRU of the South African economy is increasing at a steady rate, suggesting severe structural problems in the economy, in particular, the labour market. Using this calculated NAWRU, we obtain estimates for potential output based on the structural production function approach. Our results indicate that the capacity of the South African economy is lower than conventionally expected. This reveals the essence of the impediments on the South African economy, primarily due to the sizeable constraint posed by rising labour market disequilibrium.capacity utilisation, potential output, NAWRU, macro-econometric model