Econometrics often deals with data under, from the statistical point of view, non-standard conditions such as heteroscedasticity or measurement errors and the estimation methods need thus be either adopted to such conditions or be at least insensitive to them. The methods insensitive to violation of certain assumptions, for example insensitive to the presence of heteroscedasticity, are in a broad sense referred to as robust (e.g., to heteroscedasticity). On the other hand, there is also a more specific meaning of the word `robust`, which stems from the field of robust statistics. This latter notion defines robustness rigorously in terms of behavior of an estimator both at the assumed (parametric) model and in its neighborhood in the space of probability distributions. Even though the methods of robust statistics have been used only in the simplest setting such as estimation of location, scale, or linear regression for a long time, they motivated a range of new econometric methods recently, which we focus on in this chapter. 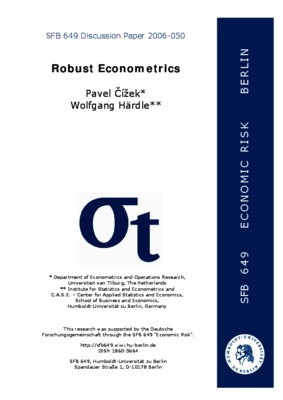