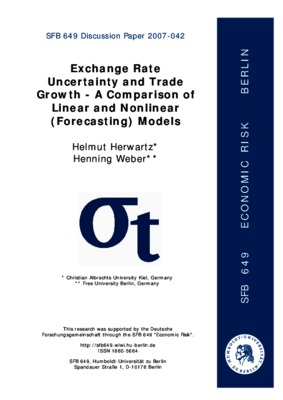 By Helmut Herwartz and Henning Weber
Get PDF (674 KB)

A huge body of empirical and theoretical literature has emerged on the relationship between foreign exchange (FX) uncertainty and international trade. Empirical findings about the impact of FX uncertainty on trade figures are at best weak and often ambiguous with respect to its direction. Almost all empirical contributions assume and estimate a linear relationship. Possible nonlinearity or state dependence of causal links between FX uncertainty and trade has been mostly ignored yet. In addition, widely used regression models have not been evaluated in terms of ex-ante forecasting. In this paper we analyze the impact of FX uncertainty on sectoral categories of multilateral exports and imports for 15 industrialized economies. We particularly provide a comparison of linear and nonlinear models with respect to ex-ante forecasting. In terms of average ranks of absolute forecast errors nonlinear models outperform both, a common linear model and some specification building on the assumption that FX uncertainty and trade growth are uncorrelated. Our results support the view that the relationship of interest might be nonlinear and, moreover, lacks of homogeneity across countries, economic sectors and when contrasting imports vs. exports.Exchange Rate Uncertainty, GARCH, Forecasting, International Trade, Nonlinear Models.