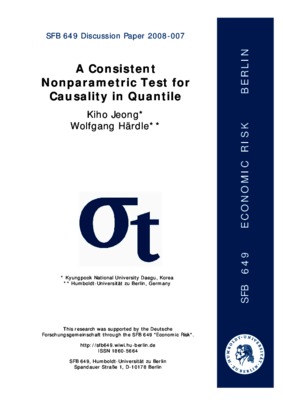 A Consistent Nonparametric Test for Causality in Quantile

By Kiho Jeong and Wolfgang Härdle
Get PDF (397 KB)

This paper proposes a nonparametric test of causality in quantile. Zheng (1998) has proposed an idea to reduce the problem of testing a quantile restriction to a problem of testing a particular type of mean restriction in independent data. We extend Zheng’s approach to the case of dependent data, particularly to the test of Granger causality in quantile. The proposed test statistic is shown to have a second-order degenerate U-statistic as a leading term under the null hypothesis. Using the result on the asymptotic normal distribution for a general second order degenerate U-statistics with weakly dependent data of Fan and Li (1996), we establish the asymptotic distribution of the test statistic for causality in quantile under ß-mixing (absolutely regular) process.Granger Causality, Quantile, Nonparametric Test