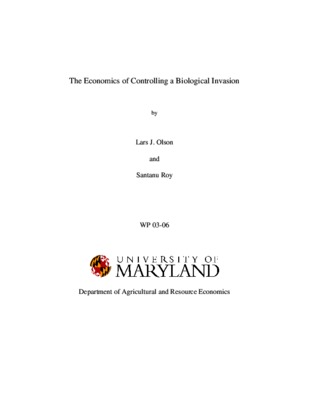 THE ECONOMICS OF CONTROLLING A BIOLOGICAL INVASION

The paper develops a simple economic model of a biological invasion. The natural growth of the invasion is non-convex and the immediate cost of controlling the invasion depends on the level of current control as well as the current size of the invasion. Greater control raises control costs today while reducing damages - now and in the future. In addition, by decreasing the size of the invasion, increased control today raises the marginal cost of control in the future. As a consequence, the optimal path of an invasion is not necessarily monotonic. When the marginal control cost declines sharply with the size of invasion, it may be optimal to allow an invasion to grow naturally before it is controlled. We characterize conditions under which it is optimal to eradicate an invasive species (immediately and eventually) and conditions under which it is optimal to manage an invasion without complete eradication.Resource /Energy Economics and Policy,