Over the past 25 years, traditional agricultural co-operatives have been challenged by competition from local investor-owned firms and multinational companies, deregulation and globalization of trade, and increased market concentration in suppliers and purchasers. At the same time, co-operatives have constantly been seeking to add value to their member services through expansion and/or adoption of new technology. The capital investment needed for these endeavours has to be financed, and for traditional co-operatives the major source of financing new investments has been long-term borrowing. As a result some co-operatives are characterized by high debt loads, which may result in increased financial risk exposure. Important factors that may influence the level of financial risk exposure are the potential conflicts between managerial self-interest and the interest of the owners of the firm (Jensen, 1986; Jensen and Meckling, 1976) and the impact of these differences on the choice of capital structure (Friend and Lang, 1988; Firth, 1995; Matthews et al., 1994). Despite the considerable literature (e.g., Jensen and Meckling, 1976; Lewis and Sappington, 1995), the impact that differences in attitudes between managers and directors/members have upon the decision making process has remained a relatively unexplained aspect of agency problems, especially in member-owned firms. This article assesses the social-psychological and demographic variables that affect co-operative decision makers’ attitudes toward long-term debt financing and their intentions to increase long-term borrowing.Agribusiness, Agricultural and Food Policy, 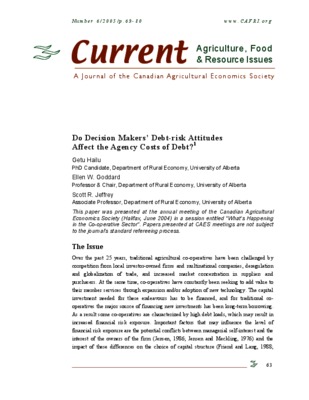