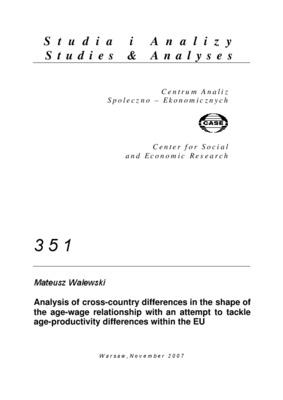 As the process of population ageing in Europe carries on and the retirement age increases, the relationship between age and productivity becomes more and more important. One can be afraid that as the average age of the working individual goes up, the average level of productivity growth will go down, resulting in decreasing competitiveness of European economies. Our expectation is that due to serious differences in labor market structures between New Member States (NMS) (including current candidates) and the EU15, the former are the first order candidates to experience higher than average productivity costs of ageing in the near future. In this paper, one tries to examine this hypothesis. The research strategy in this study has been based on the assumption that, in general, wages are correlated with productivity on the individual level and, as such, can be used as a proxy for productivity. Such an assumption is quite risky and can be easily criticized. Hence, based on the results of earlier studies, our main empirical analysis is limited to groups of workers for which one can expect that correlation between productivity and wages is still substantial. It seems, that taking all the caveats in mind, the results of our analysis show that the relative productivity of older workers in the NMS is lower than in EU15.labour market, wages, productivity, ageing