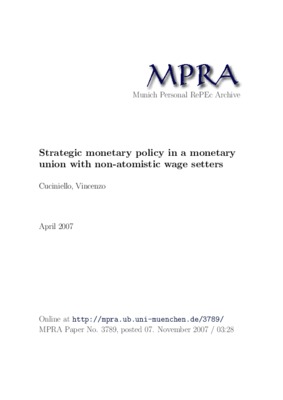 By Vincenzo Cuciniello
Get PDF (522 KB)

In a micro-founded framework in line with the new open economy macroeconomics, the paper shows that more centralized wage setting (CWS) and central bank conservatism (CBC) curb unemployment only if labor market distortions are sizeable. When labor market distortions are sufficiently low, employment may be maximized by atomistic wage setters or a populist CB. The comparison between a national monetary policy (NMP) regime and the monetary union (MU) reveals that a move to a MU boosts inflation in the absence of strategic effects. However, when strategic interactions between CB(s) and trade unions are taken into account, the shift to a MU when monopoly distortions are sizeable unambiguously increases welfare and employment either in presence of a sufficiently conservative CB or with a fully CWS. Finally, when labor market distortions are less relevant, an ultra-populist CB or atomistic wage setters are optimal for the society and a shift to a MU regime is unambiguously welfare improving.Central bank conservatism; centralization of wage setting; inflationary bias; monetary union