Income Taxation when Markets are Incomplete

We investigate the welfare effects of proportional income taxation in a standard general equilibrium model with incomplete markets (GEI). Formally, our analysis is on the allocative effects of state-contingent income tax reforms. Tax reforms are restricted to be anonymous, publicly and truthfully announced before markets open, and they are required to result in an ex-post constrained efficient allocation. Our main result is to show that there do typically exist contingent tax reforms that are Pareto improving. These reforms, acting directly on the asset span, modify private risk sharing opportunities. Thus, unlike most of the GEI literature, the type of policy transmission mechanism considered does not rely on, second order, relative spot prices effects. Yet, the key welfare effects of our tax reforms are substantially equivalent to those induced through changes in relative spot prices, as for example in Geanakoplos-Polemarchakis (1986), Geanakoplos- Magill-Quinzii-Drèze (1990), or in Citanna-Polemarchakis-Tirelli (2001).Incomplete Markets; Efficiency; Tax Reforms; Personal and Capital Income Taxes 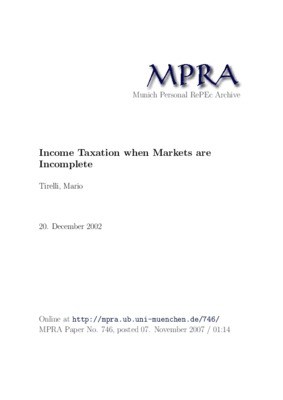