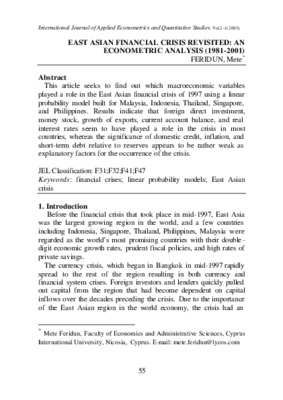 This article seeks to find out which macroeconomic variables played a role in the East Asian financial crisis of 1997 using a linear probability model built for Malaysia, Indonesia, Thailand, Singapore, and Philippines. Results indicate that foreign direct investment, money stock, growth of exports, current account balance, and real interest rates seem to have played a role in the crisis in most countries, whereas the significance of domestic credit, inflation, and short-term debt relative to reserves appears to be rather weak as explanatory factors for the occurrence of the crisis.financial crises; linear probability models; East Asian crisis