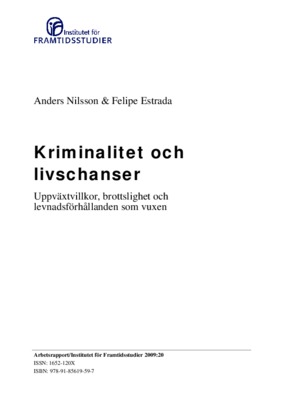 By Anders Nilsson and Felipe Estrada
Get PDF (235 KB)

What does the future look like for those boys and girls who have been registered for crimes during their teenage years? In this paper we look at different groups defined on the basis of their level of involvement in crime during the life-course. We employ a new and rich longitudinal data set, The Stockholm Birth Cohort Study (SBC), which allows us to follow a cohort born in 1953 until they reach 48 years of age. For the vast majority of those who have committed offences life has turned out well; they have a job and family. However the individuals and specially the females, who committed offences both as youths and as adults had a significantly worse welfare situation in middle age. They also came from worse childhood conditions. The study illustrates both the negative long-term consequences of inequalities in childhood conditions, involvement in crime and the inability of society to resolve these problems. An overwhelming majority of the cohort, irrespective of their degree of involvement in crime, had a similar view of what a good life would involve as an adult. The lives they then led as adults were apparently very different however.Crime; Young people; Male; Female; Future; Good life